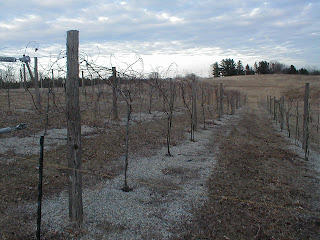 The last several weeks could not go by fast enough. After a mild December and first half of January, winter lasted until about 2 weeks ago. In the last two weeks however, things have warmed up nicely. This week, the last of the snow was out of the Vineyard, so it's time to prune.

Looks like I had very little winter kill or injury this year. Very good news. I began pruning yesterday, and it looks like only a couple a foch vines had any appreciable winter damage. The couple that had damage were due to late training , because of some late frosts in the lower south east corner. If I had to estimate at this point, I should get about 1/2 ton off of the foch this year .... assuming no late frosts, and good weather during the growing season.

Even the Landot noir looks like it did well this winter. The saint pepin, looked best of all. I didn't see any winter damage at all. I'm only 2/3 done pruning the saint pepin. I the have the Lacrosse, and Landot noir to finish up. Weather is expected to be in the 60s and 70s with scattered thunder storms the next couple of days, so hopefully I can finish that up by Monday.
Posted by Jerrold at 9:53 PM No comments: