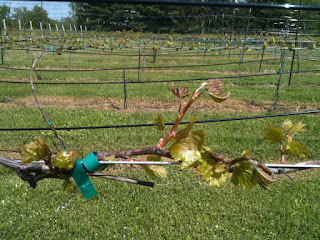 Marquette frost damage
We got to 26 F in the vineyard Friday morning. I am a little skeptical about the proper functioning of the thermometer. Damage looked pretty limited. Frontenac was hit the hardest. I would estimate 10-15% bud damage. Marquette was next at 10%, lacrescent was 5-10%.
Most of the other cultivars (st pepin, lacrosse, foch) showed very little damage. Shoots are only 1 to 2 inches right now.
Posted by Jerrold at 7:53 AM No comments:

I haven't posted much lately, but I hope to start posting more this summer. There is actually a lot going on at the vineyard. I have a couple of big projects going on. I'll post more on those as they materialize. But right now, I do have a few of updates.

-Pruning.
Pruning the vineyard took about a week and a half spread out over 1.5 months. We had an 18 inch snow storm after the first pruning round in early April. And another snow storm in late April before we finished pruning. Bud survival over the winter looks very good.

-The high tunnel experiment.
We had a major set back over the last year. Last year a spring wind storm caused major damage. I was not able to repair the damage before winter, so the vinifera vines in the high tunnel were a total loss over the winter. Since I had very promising results, I hope to make repairs next spring and replant soon after.

-The spring weather.
We have had a cool wet spring. This is probably a good thing. Bud break was delayed about 10 days beyond normal. I usually see bud break between May 1 and May 10. This year bud break occurred around May 21. Hopefully that is late enough to avoid any late frosts.

Look for more posts in mid to late June. Perhaps a few before then if I find the time.

- Harvest projections.
I should be at about 80% of a full crop this year. The youngest vines ( marquette) are in their 4th growing year. Most of the vines are a bit behind due to the 3 year drought (2007-2009). Of course this means a big picking party this fall!


-Jerrold
Posted by Jerrold at 9:26 PM No comments:

We have had bud break on several varieties in the vineyard on May 21.

LaCrescent, Foch, marquette, and frontenac have all broken bud. Prairie star is close, and st Pepin will be a few days later.

LaCrescent bud break
Posted by Jerrold at 9:20 PM No comments: