Just a note that the first sign of Chafers in the Vineyard occurred on June 14 (posted after the fact and predated for ease in finding it.)
Posted by Jerrold at 12:34 PM No comments:

The 2007 drought aftermath. Many lessons learned. 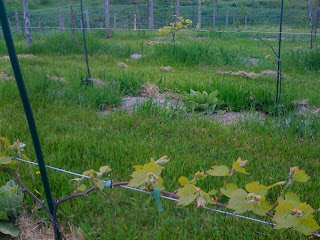 3rd Year Lacrescent (Memorial day Weekend)
May 2008 has been a tough month in the vineyard. If you have read my blog postings from late last year, you know about the drought Sampson Valley Vineyard went through last summer. It may have been one of the worst droughts in many years. We did get the occasional shower, but nothing substantial. By the end of the summer, even though I had watered them several times, I had already lost about 10-20% of the newly planted vines, and my over cropped foch was struggling to ripen their fruit. We also had a few light early frosts that hit the foch especially hard. Even the non bearing vines. So it was really not a big surprise when this winter I suffered a very bad winter kill in the foch. Nearly all of my mature vines had severe winter damage. A large percentage of my vines that would have produced their first crop this year also had severe damage. On top of it all... we had a late frost in the middle of last week, that killed off the new shoots at the bases of the foch. I should know in a few weeks, how much will have to be replanted. Right now, I will see only about 5-10% of my expected foch harvest.

So what have I learned?
1. Irrigate!!! I hope to set up irrigation for my vines this year.
2. Don't over crop. In all honesty, I did not overcrop for a normal year, but we had a dry spring and a dry summer, and the vines simply could not handle the stress.
3. Frost protection. Hopefully the irrigation can also be set up to provide some frost protection. Of course the best frost protection is site selection ... A little too late in the game for some of my vines.

I do have some good news too.

The Lacrosse and St Pepin that had small crops last year are coming along well. I expect to see about the same crop size from them this year. I should have a small crop from the 3rd year Lacrescent. That will be their first fruit. 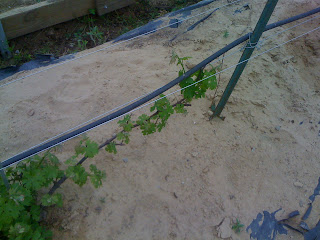 Cabernet Sauvignon in High tunnel (Memorial Day weekend)
The grapes in the high tunnel are doing extremely well. I didn't lose a single plant over the winter. I did have some bud damage, but that may have been due to some problems with the high tunnel heat cycling in the spring ... not sure exactly. 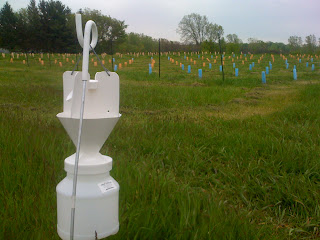 Rose Chafer Trap
It's almost time for my friends the Rose Chafers to start attacking my vines. We have had a screwy spring, so I'm not sure when they will make their appearance.

This year I have a new plan in store them. After doing a little research, I found out that they now have a trap for them. I got mine from Great Lakes IPM http://www.greatlakesipm.com/readytousekits.html


It was heart breaking to see my foch so damaged. So for what did these poor vines expend so much energy that should have been used to harden off their wood for winter? The answer is: the first commercial wine to be produced from Sampson Valley Vineyard. 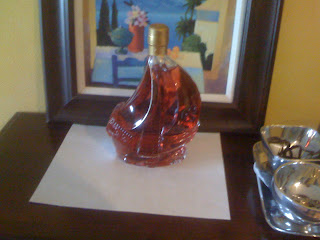 2007 Maiden Voyage Blush
Captain's Walk Winery in Green Bay just released Maiden Voyage . A blush wine made from 50% Sampson Valley Vineyard Foch, and 50% Von Stiehl Foch (At least I think that is the proportions) I got the opportunity to try some Memorial Day Weekend. I must say, the winemakers at Captain's Walk did a magnificent job. Despite having non-ideal harvest parameters, they produced a very well balance blush wine. It had a delicate strawberry nose. It was not overly fruity, but you can definitely see the youth in the grapes from which it was made.

And on a personal side note: for those who are interested ... the wedding was wonderful ... the bride was beautiful .... and the groom was a very happy man.
Posted by Jerrold at 4:58 PM 1 comment: