This past weekend brought more rain and some hot weather to the vineyard. Saturday night June 27, we got a pretty big storm which added 2.5 inches in one shot. Added to the about 4 inches earlier in the month means plenty of moisture in May. Saturday, Sunday and Monday also had highs in the upper 80s and low 90s. Things are really sprouting now.

While the saint pepin did not get hit too hard by the frost in early May, it did get nailed by the flea beetle pretty hard. Things will be okay, but a lot of mishapened early leaves. I may try to spray with sevin next spring in mid to late April, and early May to limit the damage next year.

Nearly all of the freshly planted LaCrescent have already got leaves, maybe 2 or 3 of the 48 don't have leaves yet. In the past, some plantings didn't get leaves until late June, so I may still have 100% survival yet. I sprayed Round up between the vines to suppress weeds until I can get stone down. I still haven't planted the extra vines sent. I may plant them on a gravelly hill side in the back 40. I noticed that they are sprouting pretty intensely now.

I haven't done my first fungicide spraying yet. I plan to do it the weekend of June 10. Probably a little late, but you do what you can. I plan on spraying the kaligreen this time, and fixed copper, and kaligreen the weekend of the 24th. I may spray some sevin also especially on the concord and LaCrescent vines which are more susceptible to the rose chafer damage. The rose chafer isn't due until about the June 15, but since everything is about 1 -2 weeks early, they may be there by the end of the first week in June.

I also scouted the vinifera vineyard.... I lost several vines to rodents. Of the 75 vines I have 44 left. Most of the vines lost were the chardonnay.


Finally, I pruned off many of the suckers from the bases of the foch. Several vines in the lower south east corner, are going to have to be retrained from the bases. They were pruned back or sometimes the tops were lost either due to frost or freeze problems.

We did get bit by the frost on Sunday night and Monday night May 21-22. But mostly just the lower buds and lower shoots, especially in the lower south east corner, but not nearly as damaging as the May 6 freeze. (many of the dead shoots and buds from that freeze are still visible.)
Posted by Jerrold at 11:15 PM No comments:

Missed me by that much

Well my scouts(my Mom and brother) tell me the frost was
very light, no major damage that they could see. I'll know for sure this weekend when I get up there.

We are expecting much warmer temperatures over the next several days. If things have progress well enough by this weekend, I plan on spraying.
Posted by Jerrold at 9:52 PM No comments:

Frost/freeze predicted for tonight. Right now we are on the edge of a cloud mass. If it stays far enough north I should be spared. If it goes south, radiational cooling may cause another frost.
Most of the secondary buds haven't broken yet, but some primaries on the st pepin have just begun to break. Overall it would not be good timing.

I spent the weekend mowing and trimming around the vines. Vine winter survival looks excellent. Surprisingly, I haven't lost a single La Crosse vine from last year .... I'll have to recheck my notes, but I think I had some marked as completely dead, so imagine my surprise to see some life on every single vine! Also it looks like I only lost one seedless Concord; I am very surprised, especially after the severe damage from the Rose Chafers last year.

My scouting also revealed more significant grape flea beetle damage. I'll have to read up on how to best control them. Sure are a lot of dead primaries from the frost a couple of weeks ago. Very sad to think how healthy things were looking prior to that frost, and now all the damage. Oh well.

I got the irrigation equipment installed. I still need to work on the drip lines, but the pump and hose from the water to vines is all set up. Only found one leak. It may have been caused during storage, I may try to leave it in place next year. I'll just have to make sure the water is purged first.

The vinifera look a bit better than I thought. still lost several due to rodents, but enough survived to make it worth it. I will have to replant a dozen or so.
Posted by Jerrold at 9:06 PM No comments: 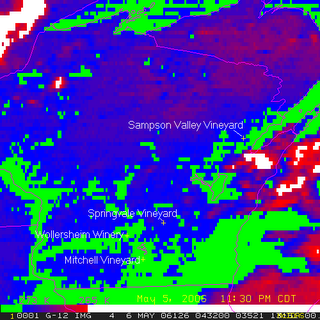 I pulled the data from the GOES-12 weather satellite for the freeze last Friday night. I enhanced it to show where the temperature was above and below freezing. I then made an animated GIF with cross hairs on a few select vineyard locations that I knew the exact latitude and longitude. It is somewhat hard to tell what is what, but the animation helps. If you are planning a vineyard, you may even be able to spot good locations that would be less likely to experience a late spring frost. http://jerroldr.googlepages.com/home
Posted by Jerrold at 10:16 PM No comments:

It has been raining pretty steady for the last 3 days. As of yesterday(Friday) we had 2.5 inches at the vineyard. The the corrected shipment of vines also arrived yesterday. I was able to plant them between rain showers. A total 48 Lacrescent were planted. I got 60 vines total, although I am not sure why that many was ordered. This may have been a mistake on the vine suppliers part. Not sure.

I'll probably put the remaining LaCrescent into a trench until I can plant them in a couple of weeks. I still have to decide exactly where I will put the vines.


Took a look at the frosted buds on the vines. They look pretty dead. I noticed that most of the Saint Pepin had not broken bud, so I may get some reasonable production from those. I also noticed some damage from grape flea beetles. Remains to be seen how much I'll have to deal with them.
Posted by Jerrold at 11:51 PM No comments:

The vines arrive ... well not exactly

My vines arrived today. I planned to plant two rows of LaCrescent vines .... unfortunately, they only sent 10 LaCrescent vines. The rest were LaCrosse! I called Double A hoping that they were just marked wrong .... nope ..... they sent the wrong vines. They told me I could go ahead and keep the LaCrosse, and they sent out my LaCrescent this afternoon. I should get them by Friday.

I had all of my holes ready before I discovered the mistake, so I planted the ten LaCrescent vines that were sent. I mixed in about a tablespoon of muriate of potash with each vine.
I heeled the 50 LaCrosse vines on the Northwest corner of hill under some box elder trees. I then covered them with a tarp. I'm not sure where I am going to plant them. I am out of space near the park. I may put them on the east end of the same field.


I also got 6 replacement cab sauvignon vines that died immediately after planting last year. I planted them in the same location where the other vines died.
Posted by Jerrold at 10:47 PM No comments: 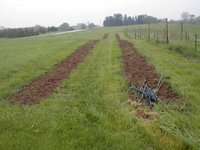 I added 5 lbs of muriate of potash to each row, and about 7 lbs of aluminum sulfate to each row. The potash was to correct the low potassium, and the aluminum sulfate to lower the ph ... the soil is quite alkaline in our area.
Tomorrow, I will try to get the holes for the vines ready. Hopefully the vines will show up tomorrow, and I can get them in the ground. But they may have to wait until Thursday or Friday ... when the temperatures are in the 50s and it's raining heavily.
Posted by Jerrold at 8:53 PM No comments:

Frost in the vineyard

Well the early spring finally caught up to the grapes. Early on Saturday morning I had a frost/freeze at the vineyard. I don't know the official low in the vineyard, but it was at least 31 F by the house; my brother commented that there was actual ice on the car outside. He estimated about 28 or 29 F at the vineyard.

Bud break began earlier in the week; I estimate about 75% of the buds had broken by Friday night. 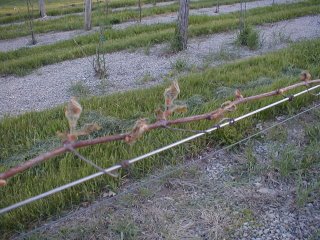 The freeze damage was scattered through out the vineyard, and I am not sure how severe the damage is yet. Some of the shoots that were already an inch or more long showed some severe damage. Some of the buds that had broke more recently, appeared as though only the outer leaves were damaged. I tried to take some close up pictures, but the digital camera with auto focus didn't work too well ... here is my best attempt at a picture of the damage on one of the vines.

The damaged caused the outer bud leaves to look black or brownish. I hope to assess the severity of the damage later in the week.

After a warm start to the upcoming week, it is suppose to turn colder and wetter starting Wednesday. The LaCresent vines that I am planting this year, ship on Monday, and I should receive them by Wednesday or Thursday. I plan to plant them the day after they arrive.

I have the week off to do vineyard work this week. On tap for tomorrow is trellis work, application of some herbicide, and other odds and ends.
Posted by Jerrold at 10:18 PM No comments: