I finished putting down weed fabric on the seedless
concord, and put 12 loads of stones on it to hold it
down. I need about 16 loads to go.

I also went around some of the 3rd year Foch and LaCrosse
and trimmed some of the suckers and sprouts from the base
to divert more energy into the main trunks.

I noticed that the LaCrosse looked stronger than the foch,
and the first year saint pepin also looked really good.
Posted by Jerrold at 10:09 PM No comments: 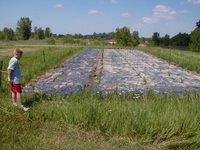 I had hired help today Jeremy agreed to help me , he
was later joined by Michael and Mikayla.
Today is Cabernet Sauvignon planting Day.
Unfortunately the new auger bent on the first hole, so it
did no better than the augers from Menards. between the
barely usable augers from Menards, and the bent one from
Farm and fleet, I was able to get all 15 holes dug for the
Cab Sauvignon ... some were a little shallow, but
workable.

so the following is the order planted at the pit
vineyard.

I also layed down most of the weed fabric for the seedless
concord. While I was doing that, the Kids and my brother
Jon were hand weeding some of the Foch vines at the Park
vineyard.
Posted by Jerrold at 5:04 PM No comments:

Irrigation pump is set up

Got out to the vineyard a little late today. I got the irrigation set up and running with a platform near the water. I also took the weed whipper to the vineyard and got a lot of weed whipping around the vineyard done. I also opened up my box of cab sauvignon, and stuck the vines in water to soak over night.
Posted by Jerrold at 8:41 PM No comments:

Got out to the vineyard about mid morning. I went
to check out the new Gravel Pit vineyard. The first row
of cabernet franc had pretty much all broken bud, the row
next to it which was merlot also was budded out well.
Only about half of the 3rd row which was a different type
of cabernet frac was budded out.... NONE of the chardonnay
had broken bud. Not sure why?

The park vineyard needed some major mowing, and I
spent a lot of the next hour mowing with my trail mower.
More of the vines had broken bud.

There was some surprising poor budding by some of the
Foch. Even healthy vines did not completely bud out. I
changed the oil on the weed whipper mower while it rained
in the afternoon. I then took the weed whipper to the pit
vineyard and mowed the space to the west to put down the 6
mil 10 ft x 100 ft black plastic. (the 20 x 100 stuff I
had put down before was only 4.5 mil)

I also adjusted the deer fence to accommodate the
additional row.
Posted by Jerrold at 10:25 PM No comments:

The Vine mix up

I spoke to Double A vineyards, and they are going to send out the Cabernet Sauvignon next week. They are a really good place to work with. More planting to do on Memorial day weekend. Unfortunately, I will need a larger high tunnel to fit the
5 instead of 4 rows of vines. I estimate that I will need a 30 ft x 96 ft tunnel now.
Posted by Jerrold at 10:00 PM No comments:

After returning the generator and drill, I headed out to the vineyards. I was able to
plant the Seedless Concord, and put up a fence around the Quarry Vineyard. The fence is not electrified (yet). But I put it up so that the wire tape is on and angled posts, to give the deer an uneasy 3-d obstacle. Hopefully that will be enough to deter them. I played a little with the irrigation, but essentially I was done for the weekend.
Posted by Jerrold at 4:22 PM No comments: 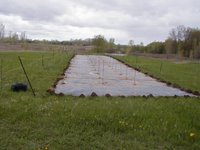 I was scheduled to plant 60 vinifera in the pit vineyard (15 Cabernet Franc, 15 Merlot, 15 Caebernet Sauvignon, and 15 Chardonnay.), and another 24 Seedless concord in the top row at the old Park Vineyard.

Another cool mostly cloudy day with threatening looking skies. I got to "pit" vineyard fairly early after picking up the rental generator, drill, and 10 guage 100ft cord. The generator fired up right away, and worked well. I put the drill auger on the drill that I rented ... (the auger is a 2 ft rod with a 2.5 inch spiral blade on it.) I had tested lightly once before, but decided to dig another test hole, to see how the drill/generator combo worked. Well I had dug more then 5 inches, when the welds holding the blade to the rod broke! 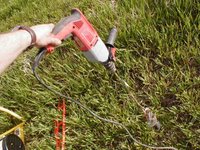 So here I was, not a vine planted, and my instrument of digging had already failed. I considered my options ... I could run to Green Bay, and blow 2 hours. I decided to try Pulaski ... I hoped that the CO-OP or the Verns Hardware would have an auger.

I got to Pulaski ... I check both places no auger. The CO-OP did have the large augers, but I didn't think they would work well going through the plastic. Plus they were tough to handle by yourself ... not to mention expensive. So I called my
Mom, and asked her to run to the a store in Green Bay to get me 4 augers .... in case more broke. I made the call from the BVM parking lot .... they were cooking booyah for something ... it smelled good, so I picked up a gallon ($16 bucks). (by the way ... it wasn't that good ... potatoes were under cooked ... not enough seasoning ... needed salt and pepper etc... does not hold a candle to Vernon's or my Dad's.)

I got back to the vineyard and worked on preparing some other things .... setting up the irrigation, marking the vine locations on the black plastic etc.

When my Mom came she dropped off the augers, and I was able to resume planting. I was much more carefully with the augers this time. I went more slowly and carefully.

I dug all of the holes for the first row. (the first row to the west) I opened up the box of vines, and stuck them in pails of water. The first west row was going to be Cabernet Franc. All of the vinifera that I was planting were grafted on to root stock. The grafts were precoated by Double A with wax to prevent the graft union
from drying out. I planted each vine such that the graft union was about 2 inches above the soil. I did no trimming of the roots. Since each hole was about 2 feet deep, and each grafted vine was 15 - 18 inches long. I lowered the root part of the vine as deep as it would go careful to keep the roots pointing down ward. I then pulled the vine out of the hole until the graft was about 2 inches above the soil level. I then push dirt down the hole .... I tried to use wet muddy dirt when possible to insure that the roots had no air spaces. I wasn't always successfully in doing so.

The next row was merlot .... I again dug all 15 holes in a row ... I was getting much
better and faster with the hole drill now. Each hole could be done in about 30 seconds or so, unless I hit some clay or hard pan .... some holes seemed sandier than others too.

I planted the whole row of merlot in row two. At this point it started to rain again, so I decided to work on the irrigation for a while since I didn't want to
work in the rain with an electric drill.

I got the irrigation pump set up about 12-15 feet above the pit water. A 30 foot intake hose was attached to the pump. I made sure all fittings were tight. After great effort I was not able to get things to work. Soon my brother James stopped
by with my niece Treva. He showed me what I was doing wrong ... which was several
things. One ... I needed to close the discharge with a valve until pressure had built up ... two he thought that I was too far from the water ... even though the pump should have been able to draw water 25 feet high, he said in practice it was best to be closer to the water. So after some experimentation, we concluded I needed to be much closer to the water. Unfortunately, I will have to set up a platform closer to the water. That will have to wait until another weekend. For now, since the rain had stopped for a while, it was back to planting.

I was going to plant the Cabernet Sauvignon next. Unfortunately I could not find any
vines labeled Cab Sauvignon. Turns out they sent me two different batches of Cab franc instead ... (two different clone varieties.) This was not good news.
I really wanted the Cab Sauvignon for the Bordeaux blend that I wanted to make. I did not know if the vines were just miss labeled, or if they sent the wrong vines. So I planted the Cabernet Franc vines in the third row (these are the Cab Franc vines that matched what I ordered.) The final row was chardonnay.

At this point I drove out to the Park vineyard to dig the holes for the Seedless Concord grapes. I had to plant 24 of them, and since I had to return the drill and generator the next day, I wanted to get that done. All in all ... I broke 4 augers
for all of the plantings .... in all cases, the single weld at the top and bottom of
each auger is what broke. Since then, I have bought a new auger which has what appears to be better welds, and three of them one at the top, bottom, and middle.

By the end of the day, I was able to get all of the Vinifera that I had, planted. The concord seedless remained.
Posted by Jerrold at 10:15 PM No comments:

When does Spring Come any way?

Still cold wet and miserable. I got pieces of the irrigation set up. Still haven't got the pump done and running yet. I did a little more rough cutting on the hill facing the vineyard, all that remains are the bigger trees, I'll take a chain saw
to them at some point.
We had a frost last night ... James said he saw 29 or 28 F that morning. I didn't see any significant damage in the vineyard, but since many of the buds had broken, there may have been some damage that I missed.
Posted by Jerrold at 10:13 PM No comments: 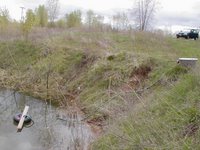 Thursday was colder and wetter than Wednesday, I changed the oil on the rough cut mower, and put some missing bolts in, I also got the preliminary water pump system for irrigation set up. I had intended to change oil on more equipment,
but never go to it.
Posted by Jerrold at 10:11 PM No comments:

I was able to mow the vineyard, and clear most of the hillside facing
the vineyard with the rough cut mower. I didn't get much else done other than some
shopping for vineyard supplies, and scoping out costs of generators, pumps etc. Rain started
just as I was finishing mowing. I still needed to do some cleanup mowing, but I
thought there would be plenty of time to do that later in the week.
The vines arrived today .... I put them in the back of the shed where
they would stay cool .... like that would be a problem.
Posted by Jerrold at 10:00 PM No comments: