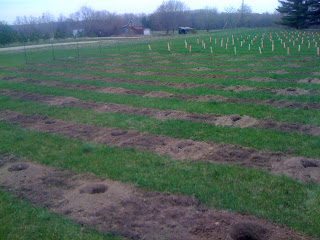 I planted 200 new Marquette vines this weekend. This brings the vineyard total to 863 vines. The Marquette vines will be the last vines planted in the vineyard for a few years. Marquette is the new (released in 2006) very highly regarded hybrid out of the University of Minnesota. Early reviews have described a more tannic and complex wine produced from Marquette. Check out http://www.grapes.umn.edu/marquette/enology.html and http://www.grapes.umn.edu/marquette/viticulture.html for more informtion about Marquette grapes.

Vines are for the most part well behind last year's. The laCrescent seem to be the furthest along. It looks like I had excellent bud survival among the laCrescent. As of Saturday, it looks like bud break could occur in the next week with warm weather ... although it has been quite cold the last few days (snowed Saturday and today!) Tonight's low is expected to be in the mid 20s F. Luckily no vines have broken yet.

The foch have swollen buds, but are several days behind the lacrescent. Lacrosse and especially the Saint Pepin are barely beginning to swell.

The buds on the vines in the high tunnel have swollen quite a bit, and some buds near the bases of the trunks have already broken, but for the most part, they are still a week or more from bud break.

In Madison, (in my backyard) my foch has already had a few buds break, but the cold weather the last few days will keep the remaining buds from breaking until the end of the week.

Final Thoughts
My wedding is only 2 weeks away, so I won't be back in the vineyard until the end of May. My vineyard manager, will be handling early mowing and vine tying/training until then. Also, due to the late winter, windy weather when working at the vineyard, and limited time I have had to devote to vineyard activities this year, I did not spray lime sulfur. This puts me at greater risk to anthracnose, but that's the way things worked out.
Posted by Jerrold at 11:04 PM 2 comments: 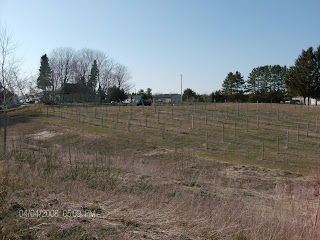 Vineyard on April 4, 2008
Wow ... what a winter! Things are finally warming up, and I was able to get my pruning done before my vines broke dormancy. Here is a quick synopsis of the winter at Sampson Valley Vineyard. 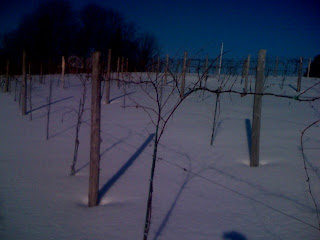 From about December 1, 2007 - March 30, 2008 we had substantial snow cover with the exception of about 1 mild week in January. During much of that time, the snow was a foot deep or more. The frost depth was quite low, so that when the snow cover finally melted in the last week and a half, the ground frost was also gone.

The coldest temperature recorded in the vineyard this winter -16F. Last year(2006-2007) it was -15F, and the year before (2005-2006) it was -17F. This year we had much more time spent below zero, and more often. We did not have many warm periods, with the exception of about a week or two in January, and we never got the long warm spells like we did in the last two winters. 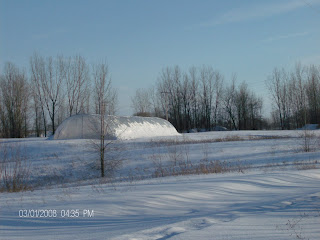 Tunnel on March 1, 2008
Despite several long periods of below Zero Fahrenheit temperatures, the coldest the center of the high tunnel got was +12F. And near the edges (about a 1 meter in), we got to about +7F. During sunny Days in January and February, the temperature reached the 40s and 50s. 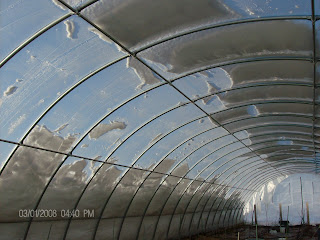 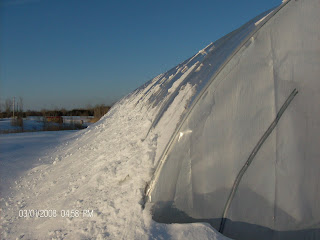 As soon as March rolled around the lows were similar to earlier in the winter, but the high temperatures started sky rocketing. On sunny days, the temperature reached over 100F!!!

At this point I decided the end flaps needed to stay open. This kept the high temperatures even on very sunny days, closer to the 70s and 80s. Still warmer than I'd like, but better than 100F! I'll need to install some automatically opening vents for next winter. 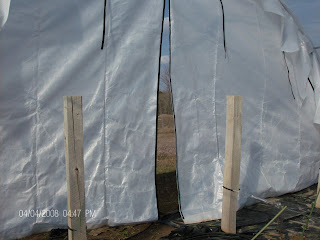 My routine (non high tunnel) pruning this year was completed in 3 days ... April 2- April 4. Normally I would have had this done by the end of March, but the substantial snow cover set me back a couple of weeks. 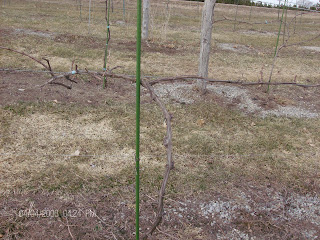 A LaCrosse vine pruned to a VSP trellis system.
In general things looked pretty good. I did not see any rabbit or other rodent damage. I had expected to see some, since I had a lot of rabbit damage in my backyard. Even along the paths to the vineyard, the boxelders and sumacs had much of there bark chewed off from about a foot off the ground to 2 feet up. However, the vineyard was pretty much untouched.

There was very little winter damage in the LaCrosse and StPepin. The Landot Noir showed a significant amount of winter damage, but no more than other years .... I really need to pulls those out, and replace them with Foch. The Foch vines that did not produce last year, looked pretty good. There was some damage to the heavily/over cropped Foch from last year. It remains to be seen how much. I did prune those pretty severely, but possibly not severe enough.

I should be able to get a small crop from the LaCrescent this year. They did not have a great year last year due to the drought. But hopefully, they can make up for lost time this year. 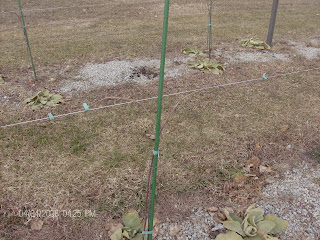 A 3rd year prunned LaCrescent vine.
I still don't know how many of the new plantings from last year made it. I planted 100 each of Prairie Star, LaCrescent and Frontenac. Already in the fall I know I had lost several to the drought, so it will be interesting to see how many survived the winter.

Next week I hope to start preparing for my 200 Marquette vines that I will be planting. I have been hearing very good things about Marquette. I have had the oportunity to taste a Marquette wine from New York this past winter. It did not blow me away. None the less, with such good word of mouth from others who have tried some of the Minnesota produces Marqutte wines, I thought it was definitely something to plant. These will be the last vines I plan on planting for a while (except to replace dead or unproductive vines). This will bring my vine total up to almost 900 vines or about 1.5 acres.

My todo list for the next month ...
- dormant spray lime sulfur to control anthracnose.
- till and prepare for marquette
- more trellising
- setting up drip irrigation for high tunnel
- look at putting in a well and irrigating the outside vines.
Posted by Jerrold at 4:02 PM 1 comment: