One of the reasons Harvest is later than usual this year


This picture kind of says it all.   For the first 8 months of 2014 the coldest anomaly on the planet is over Wisconsin.

At the same time, it is a bit scarey how much red and pink there is, and how little blue is on that image.
Posted by Jerrold at 9:45 AM 2 comments:

Now this is what I like to see two weeks before harvest!

A lot of rain is predicted over the next 5-7 days.


That is not something you want to see at this time of the year.   This may cause berry splitting, and other damage.
Posted by Jerrold at 3:14 PM No comments:

Sampson Valley Vineyard is proud to say it provided Leigh with many of the grapes in his wines.

Veraison started about when predicted, and is nearly complete.   Marquette began veraison on Monday, August 11, and was 95% complete by August 16.   Frontenac was 50% done by August 16.

Harvest is now anticipated to begin the first weekend of October.

A random cluster was left behind on the two year old somerset seedless.    Beautiful looking grape!   After tasting a few berries, it is probably only a week or so from being able to be harvested.   Good to know for future years!   I did notice a slight residual seed, but not too much.   It already has a nice taste.   I heard rumors that it makes a decent wine ....... hmmmm?
Posted by Jerrold at 5:04 PM No comments:

Frontenac and Prairie Star have begun to bloom. ( Unfortunately Rose chafers have emerged too.) This puts us about 2 or 3 days ahead of last year.   Bloom has been one of the best early indicators for predicting harvest date.   Based on bloom, I think harvest will occur no earlier than the last weekend in September for LaCrescent, and Prairie Star.    The next two weeks I would likely plan on picking Marquette and Frontenac.  Weather during the season can still shift those dates later, but earlier dates are unlikely.  Crop loads look high right now, so I may need to do some crop thinning.    We are seeing almost zero bud loss on LaCrescent, Marquette, Prairie Star and Frontenac.    Foch is the only cultivar that had significant damage, It looks like 50-80% primary bud loss.
Posted by Jerrold at 11:39 PM No comments: 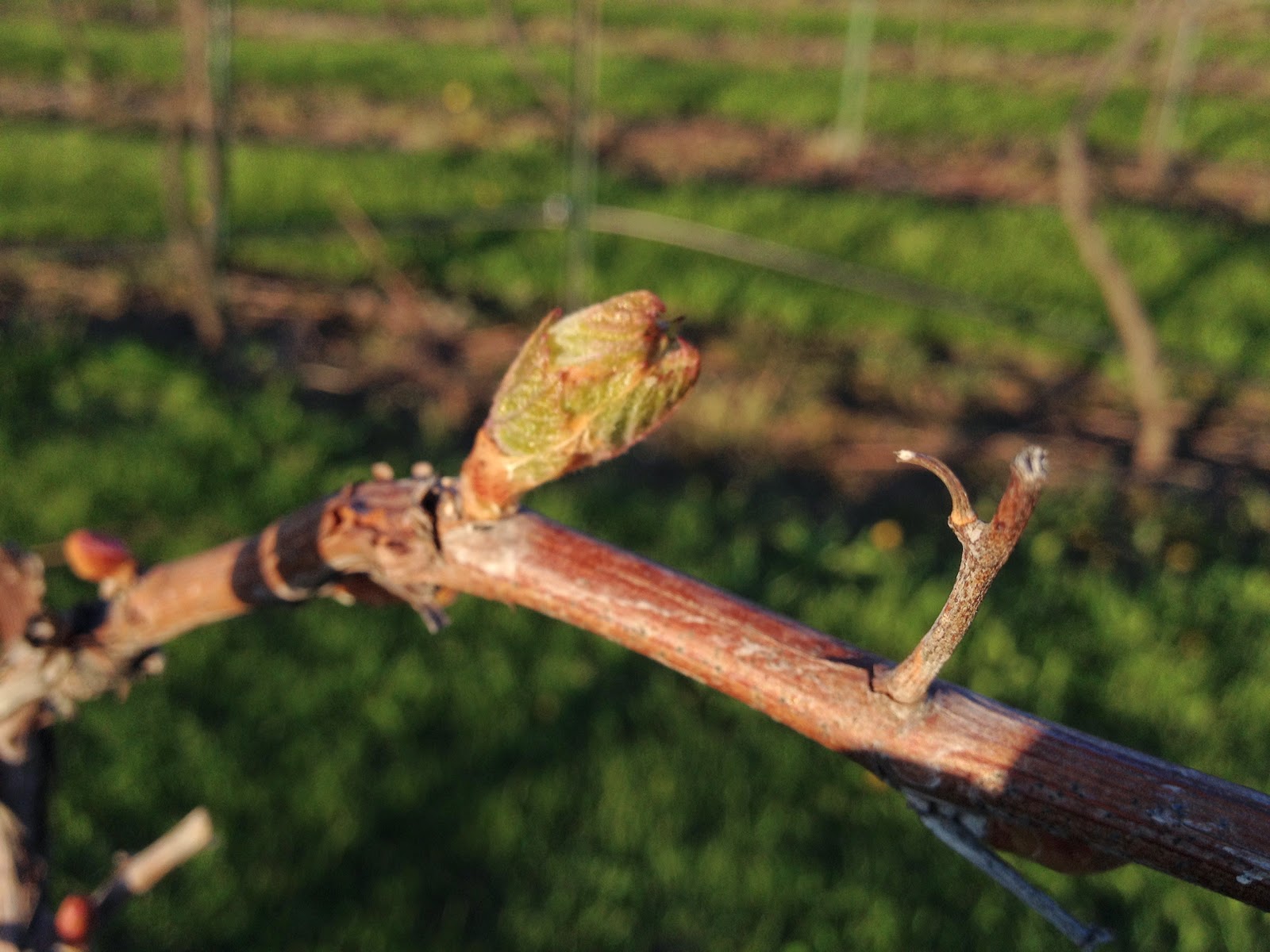 As expected bud break is later than average this year.   Somewhat surprisingly, this date is not that unusual.  Below is a table of bud break dates at Sampson Valley Vineyard over the last 9 years.

Note that the bud break average date is May 13.   Average GDD at bud break is 134.   So bud break this year is only about a week behind the 9 year average.

Based on forecasted temperatures and average temperatures after the extended forecast period, bloom is estimated to begin on June 18.

So far most vines look like they survived the severe winter quite well.   The one notable exception so far is foch.    Looking at the foch buds during pruning, we were seeing significant bud damage.   We are seeing good bud growth now, so hopefully there was no major trunk or vine vascular damage.

We are expecting the coldest temperatures my vineyard has ever seen over the next several days.   Highs on Monday and Tuesday may not get out of the minus teens Fahrenheit. Low temperatures will approach -20° F to -25° F (-29° C to -32° C).

NWS forecast
While most of the grape cultivars I have planted should be okay, some will be on the edge of having some damage.


*The source for the hardiness temperatures for these varieties were found elsewhere.

Several things will determine how my vines pull through.  Including but not limited to:
Of these factors,  harvest time and crop load last year may be impact my vines the most.   Crossing my fingers that everything goes fine.