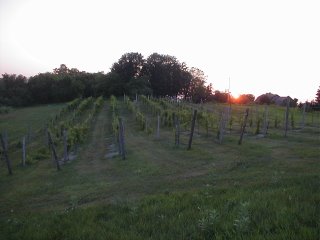 The experimental vinifera vineyard is still battling the deer. It looks like the deer are visiting fairly regularly. Decided to try a trick I read about on one of the grape growing groups. Using high pound test fishing line. I strung 40# test around the plot... I am not hopeful, but until I get the high tunnel up in the next few weeks, it is all I have. Since this is just temporary until I get the high tunnel up, I didn't want to invest in another solar fencer. Speaking of solar fencer, I noticed some odd burning and blackening of some of the grape vine leaves in the park vineyard on the bottom row. It didn't take me long to realize that the burns were from the fencer! The shock from it is very light ... Kind of like a static shock, so I was surprised that it could damage the foliage. Anyway I moved the fence back a few feet from the vines to keep the foliage from getting anymore damage.
Posted by Jerrold at 11:07 PM