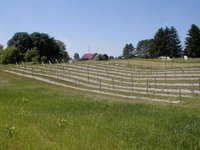 
I hope to get some trellising done next weekend, since some of my winter die off, may have been due to vine injury from poor trellis support during the growing season.
Posted by Jerrold at 10:12 PM