Springtime Pruning cont. "What lies beneath?"

On Thursday, March 30, the temperatures were climbing well into the 50's again. I started worrying about the vinifera under the tarps. I planned to leave them under until Easter or even 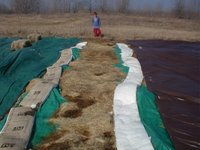 the beginning of May. But I began to worry that the heat may cook them. To hedge my bets, I decided to remove the tarps from half of them. I removed the tarp from the North half.

I have two layers of tarp, with hay and fiberglass insulation sandwiched between them. It was my hope that these would be a nice dry layer to keep the vines warm. Unfortunately, I saw more rodent holes in the top tarp. It slowly became apparent that my tarp/hay/insulation sandwich was an ideal rodent overwintering home. The holes in the top tarp also let rain and melted snow in between the tarps. This caused about 2/3 of the hay and insulation to become wet. Not nearly as good of an insulator. 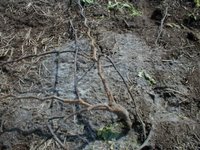 After scraping off the wet hay and insulation, we removed the lower tarp layer. Things did not look too bad. The rodents did chew on the vines, but not to the extent that I feared. In fact most of the chewing looked to be very superficial near the base ... almost like they only ate the wax covering the graft unions.

I will know in about a month if this gnawing actually harmed the vines. My pruning showed little winter kill on the vines, but much more than I had expected. Probably due to the lack of insulation. The merlot and Cab Franc faired the best. The chardonnay did next best, with the Cab Sauvignon doing the worst. The cab Sauvignon however were planted 2-3 weeks later, and did not look as good as the other going into the winter, so that may have had more to do with their health than anything. I still plan on putting the high tunnel up in the next couple of months. 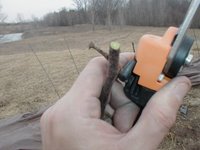 (merlot pruning, looking pretty green!)
I put up some light wire around the part of the vineyard that I removed the tarps. Hopefully enough of a deterrent to keep the deer from chewing on the leafless vines until I get up to install the high tunnel.
Posted by Jerrold at 10:05 PM