Catching upSt Pepin July 20, 2008
It's been a busy summer. But who isn't busy these days. I'm going to try to catch up on the last two months in this blog.


Starting in June.
We've had a good spring. It started out cool, but we got a lot of rain. The perfect prescription for recovering from last year's drought. We also had several windy days. Unfortunately some gusty days just after Memorial day did a number on the high tunnel cover. 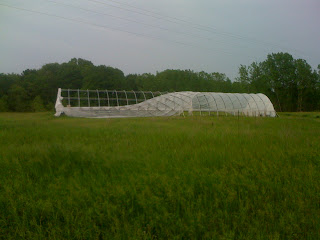 High tunnel on June 7, after the winds a day earlier.

Growth in the high tunnel June29

June 14, 2008 the Rose Chafers return!!! I knew they were coming. And sure enough right on schedule they were back. I wasn't sure if the cool wet spring and the long winter would slow them, but they were pretty much right on schedule. As I mentioned in an earlier post, I put out chafer traps this year with the hopes of avoiding some of the damage.
Rose Chafer traps stand gaurd over the vineyard.
The traps did not seem to be too effective initially. Some of last years plantings, and the new marquette plantings were taking on some damage. I decided to spray those vines with Sevin since they had no blossoms. I try to avoid using Sevin or any non organic pesticides, but the vines are nearly completely consumed with out strong intervention. Sevin is very toxic to bees, and should not be used on vines in blossom so as not to kill bees.


The 3rd year LaCrescent vines were also being attacked. These vines did have blossoms, so I did not spray them. Some of the vines sustained severe damage. About 10-20% of the 3rd year vines were significantly set back due to the Chafers.


Eventually the traps did seem to make a dent in the chafer population. Overall, the damage to unsprayed vines was less than in previous years.

LaCrescent Vine at the end of June (trained VSP)
I also spent a few days puting in 50 end posts for the trellis in the new vineyard. All vines in this vineyard will be trained VSP.
Endpost installed on June 29

We had good rain in the beginning of July, but intermitantly had a few dry periods too, overall moisture was adquate.
July 12, 2008Old Vineyard July 12
The new vineyard is coming along well. I started putting up trellis wire at line posts in July. Most of last years vines were emerging well from their growtubes. They were definitely behind where vines had been in the past at this stage, but at least they are recovering.

Of the vines planted last year, the frontenac seems to be doing best. The best overall survival from last year was the Prairie Star, the lacrescent had the worst survival, but of the vines that did survive, they seem to be growing faster than the Prairie Star.Frontenac planted last year (picture from July 12 this year)
This year's Marquette has been most impressive. Only one or maybe 2 vines appear DOA, most of the rest have matched or exceed the growth of last years plantings of Frontenac, LaCrescent, and Prairie Star.
Marquette on July 12
The LaCrescent in their 3rd year have definitely suffered from the Rose Chafer attacks in June. The bugs were out while they were in blossom, and the few clusters on the vines definitely appear to be quite sparse. Many of the leaves on the larger vines show the effect of them also.LaCrescent on July 12
As I mentioned in earlier posts my Foch had a rough winter. Fortunately, I don't think I completely lost any vines. Unfortunately, most needed to be retrained. They are coming back fast, but it would be nice to get a full crop off all of the vines. Retrained Foch July 20
By July 20, many of the marquette were already well over 3 feet tall. Some approaching 4. I am rushing to get the trellis up in hopes that I will be able to get some trained in the first year. In most cases I would cut them back to 1 or 2 buds in the second year anyway, but I may keep a few trained on to the trellis if they have adequate growth.Marquette on July 20