Catching up on the latest activiies 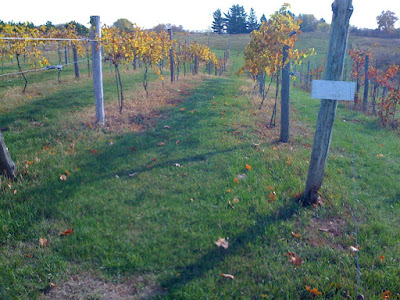 Late October 2008
A lot of vineyard reports to catch up on. Yes, Sampson Valley Vineyard is alive and well; I've just been a little behind on my vineyard updates. I'll have several posts catching things up. Here is the run down on the remainder of the season....

The season ended pretty dry. This was the second year in a row of drought conditions in the vineyard. If the vines had been more mature and healthy, the lack of rain would not have been that big of a deal. Unfortunately, the new plantings from 2007 are still way behind where they should be. The 2008 marquette plantings did well due to the early season rains. The overcropped foch did not recover as quickly as I would have hoped. They are still a couple of years from returning to full production.

The season ended with a hard frost in mid October. Total production this year came from LaCrescent, LaCrosse, and St Pepin. And that was significantly down from 2007.
Posted by Jerrold at 10:58 PM