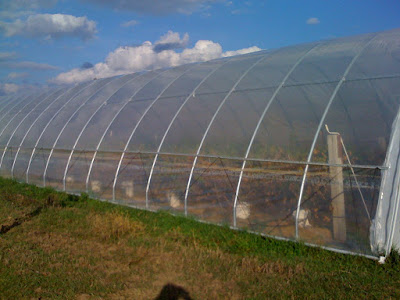 The vines did very well in the high tunnel this summer. I did have some powdery mildew and downy mildew issues, but this was probably due to the fact that the cover was not in place for most of the summer due to early summer wind damage. Luckily the vinifera varieties in the high tunnel are not sulfur sensitive, and a organic bordeaux spray should take care of it in the next season.

In another mini-experiment, it was showed that you can not simultaneously grow grapes and tomatoes in the same high tunnel. One of the more traditional high tunnel crops are tomatoes. it became obvious why after my brother decided to plant a half dozen tomato plants among my grape vines. The tomatoes did well... very well. Each plant grew to be almost 10 feet in diameter. It got to the point where you could not walk down the row without stepping on a tomato. 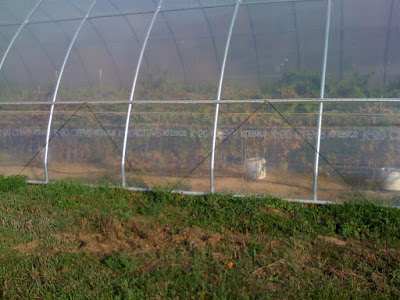 A hard frost occurred a few weeks later in the high tunnel as expected. This was the first year that the cover was in place before first frost. The two pictures above were taken in late October. For the entire summer the sides were rolled up. They were lowered starting in October. 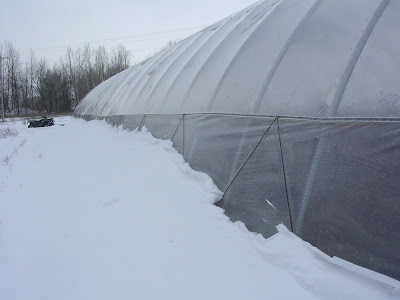 Snow came early in often. We had a few inches of snow in November, but then got a deep blanket in December. By mid December, we had several feet of snow.


By mid January we hit some of the coldest weather since I planted in the vineyard in 2003. The lowest temperature in the past week reached -22 F. This is 5 degrees colder than what I had seen in the previous 3 winters, and probably the coldest in 8 years. We went about 3 days without even getting above 0F. The good news is that the coldest it got in the high tunnel was +5F. This is well above the critical temperatures for any of the varietals that I am growing.
Posted by Jerrold at 11:24 PM

Anonymous said...
This comment has been removed by a blog administrator.
3:09 PM

I have a vinifera grape tunnel experiment west of Chicago. I'm curious if you've had any success since you posted this. I would be interested in an exchange of info. I can be reached at wshoemak@illinois.edu.

What is the spacing for the vines inside the high tunnel? What varieties did you plant?

I planted Cabernet Sauvignon, Cabernet Franc, Merlot, and chardonnay. 6 feet between rows, 6 feet between vines. My big mistake was putting the fruiting wire too close to the ground. I had it low because I wanted the warmth of the soil to keep the vines warmer. This turned out to be unnecessary. In reality, I should have put them closer to 36 inches. It would have significantly improved air flow, and made picking easier.